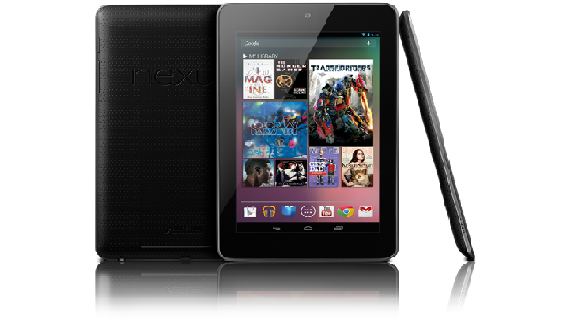 After much industry speculation and rumors, the new Google nexus tablet and e-reader competitor the Google Nexus 7 will be released and available for pre-orders this month. According to top tech sites, the Google tablet is garnering a solid positive response. You can read the full reports from Gizmodo and Wired, but I’ll cover the highlights for you now and how this might effect authors.

The Google Nexus 7 stands out from other industry competitors such Amazon’s Kindle Fire the Nook Tablet, with a blazing fast 1.2Ghz quad-core processor and a seven inch 1280 x 800 display. Where as the Kindle Fire and Nook Tablet have slower processors and a smaller screen resolution of 1024 x 600 pixels.

No question a huge selling point is the price, retailing at a low $199! With Google Books, app store and Android OS platform, the Google Nexus 7 Tablet is set to take a good portion of the market and become Amazon’s main competitor in the tablet-eReading arena.

The Nexus 7 also ships with features such as a front-facing camera, Wi-Fi, microphone, GPS, Bluetooth and batterlife up to 10 hours. Two models will be available upon release; an 8GB version for $199 and it’s larger brother with 16GB selling for $249.

How will Google’s new tablet affect authors and e-reading?

The most obvious is the addition of a new competitor in the marketplace, who has the brand and financial power to make a serious dint in the tablet market fought over by Amazon and Apple. This means eBooks become even more accessible for readers with lower prices, and another opportunity for authors to reach readers with a new platform.

Early reports from tech sites and early consumers is the Google Nexus 7 will have Amazon appstore and Kindle App capability, where the Kindle Fire only has access to Amazon content. This alone will be a HUGE buying decision. Google has always presented their Android OS to be an open platform, rather than hold on to exclusivity. This has some punters believe could be one of Amazon’s mistakes, perhaps Google’s gain.

The EPUB format is Google’s default file eBook type for the device. Coupled with the ability to read Kindle books, means Google is well placed to be the superior alternative to the Kindle Fire or Nook Tablet. If consumers embrace Google’s tablets, you’ll see distribution aggregators such as Smashwords place Google up front and center beside Amazon and Apple.

With millions now using Google’s Android phones, fans and consumers are increasingly becoming familar with Google’s products and the Android OS. These consumers you would expect to lean towards the Nexus 7. Additonally world wide computing manufacturer ASUS is making the tablet and they too will promote their contribution post release. This means the chance for high consumer adoption and the tablet’s ability to penetrate the tablet-eReading market is promising.

There’s more exciting times ahead for consumers and those of us in the publishing industry. At this time of writing, pre-order’s of Google’s Nexus 7 tablet are available to customers in the United States, Canada and the United Kingdom with additional countries soon to follow. I’ll be keen to check this out as soon as it’s available to Australia.

Shares
← How To Get More Blog Traffic To Your Author Website
Ebook Pricing: What’s The Value of An eBook? →